“Conservatory Craftsmen are true artisans. Jim Hewitt, who heads the company, knows everything there is to know about conservatories, greenhouses, orangeries – you name it. In late 2014, when we reached out to Conservatory Craftsmen through the Houzz website about building a conservatory onto the second floor of our Colonial Revival home, Jim himself emailed back within a couple of hours. He then visited our home in New York several times over the winter to brainstorm, measure, and plan for our conservatory. And, by September of last year, all of the plans had become a reality. We could not be more pleased with our conservatory. The lines are graceful, the design fits perfectly with the rest of our house, and the materials and construction are top quality and just, well, beautiful. I smile every single time I walk into that room.”

As with many 100-year old homes, this house had originally been built with a first floor that was larger in square footage than the second floor. And, what was often done as a bonus with that extended room was to create a flat roof that could function as a “veranda” for second-story bedrooms.

Oftentimes, every bedroom would have an exit door out to its attached roof top veranda so that members of the family or, on occasion, overnight guests could step out onto the flat roof and sit leisurely as evening progressed.

Since there was no air conditioning, per se, 100 years ago, sometimes beds would actually be dragged out onto the roofs in the heat of the summers so that one could sleep in the cool night breezes.

It all sounds historically romantic, however, the reality of the setup was often quite different than the intent. There were some inherent flaws that, frankly, haven’t changed in a century.

First of all, roofs were heavily tarred or pitched to create a water-tight seal against the elements. On hot summer days, that could mean sticky black shoes as a result of roof relaxation. On cold days, the roof top could be subjected to icy winds because it lacked protection from the cold weather. And, finally, there was that ever-present 3º slope to the roof that kept the rainwater moving slowly away from the house. It took some getting used to… kinda like getting your sea legs every time you went out there.

So, our client not only had a huge space just outside their bedroom, they already had a door to get out there. And, for all the reasons listed above, that space was never used. Add to that mix the fact that they both worked in New York, about 30-miles away, and they were eager to build a multiple-use conservatory that would function as their private retreat AND as their home office space. Finally, like the cherry on top, there was her majesty, the cat, to think of. She had long been inconvenienced staring out bedroom windows and, in her humble opinion, she deserved an upgrade. 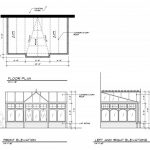 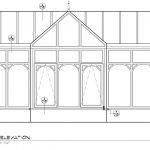 Conservatory Craftsmen was both the architect and builder on this high-flying, eagle’s view conservatory. 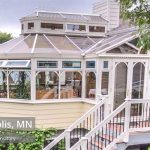