Hidden in an unassuming old building in rural CT is a treasure of botanical wonder. If you are directed to Logee’s you may stop, but if just passing by, you may not even notice, but behind the century-old façade of a rural farm home lies some of the most unusual and highly prized ornamental plants in the country. 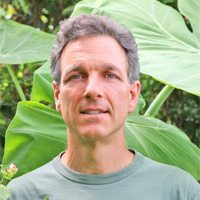 Owned by Byron and Laurelynn Martin, the greenhouse was first started in 1882 by Bryon’s grandfather.

Byron worked in the greenhouse with his father and grandfather and eventually went off to school, not planning to return, but eventually heeded the call when his time came.

Horticulturalist, Jeff Ellsworth from New York City claims that most of the rare plants purchased by the NY Botanical come from Logee’s. They work the world market to find both rare plants and improved varieties of old friends.

The last time I visited, Byron welcomed me as an old friend. As we walked through the greenhouses, Byron said, ‘wait here’ and he disappeared into an old house to come out minutes later with a small dark red bean. Miracle Bean he called it and invited me to try it. I have to admit it did not taste like much, but I was polite and ate the bean.

A few minutes later, Byron showed up with a huge Meyer Lemon from one of his trees and he cut deep into it with his pocket knife as the juice squeezed out onto the ground. He handed me a section to bite into. I was already salivating like one of Pavlov’s dogs when I bit into the lemon and to my surprise, it tasted like I just chewed into a sugar bowl! Miracle Bean had deadened my ‘bitter’ sensors and all I could taste was sweet. According to Byron, it acts the same with dill pickles and any other sour food.

These are just some of the many plants growing at Logee’s and there are thousands more. Go online to Logees.com and look through the site or request a catalog. They ship thousands of plants to conservatory customers all over the country. The exploration of the greenhouses is like no other. Not a ‘big box’ greenhouse but small, intimate growing spaces with dirt floors and crooked walls and paths that lead to yet more greenhouses!

Laurelynn showed me a Kumquat that was 140 years old and growing in a greenhouse, right in the middle of an aisle. And an orange growing every variety of orange they cultivate at Logee’s.

Today was “summer fest” and over 1000 locals were about to descend on the greenhouses to find that plant like no other. I left with an Arabica coffee plant for my brother’s birthday and a citrus tree for a new conservatory customer. Citrus plants are their biggest sellers.

We are happy that Byron and Laurelynn Martin of Logee’s have accepted our invitation to spread the news of great plants and well-crafted conservatories to America.
Watch for us in coming months whilst we feature new plant varieties available at Logee’s and as you see conservatories showing up in their catalogs and web pages.

Four Tips to a Cooler Conservatory this summer 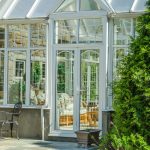 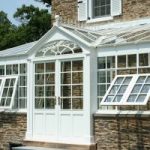