#flashbackfriday to our feature in the August 2012 Sheridan Road Magazine.

A Breathtaking Perspective
by Jenna Schubert

The beauty and wonder of a conservatory make it one of the most sought-after and admired rooms in the home and commercial design industry. For the team at Conservatory Craftsmen, based in suburban Minneapolis, there literally is no mountain high enough to keep them from building exquisite, first-rate conservatories around the nation. “We have worked atop tall buildings in New York and Chicago, battling high winds and the elements. We have worked in the mountains of Montana and North Carolina with vistas best captured from a glass room,” says Founder Jim Hewitt. “And we just recently completed lovely projects in Highland Park, Wilmette, and Arlington Heights.”

For Jim, the appreciation and love of conservatories have been a lifelong one. “I grew up in St. Paul, Minnesota, one of the lucky urban areas in the U.S.A. that still has a public conservatory, at Como Park,” Jim says. When Jim was a boy, his father would take him to enjoy the warmth and greenery of the conservatory–in the midst of freezing Minnesota winters. Jim retained his love for plants and biology as he went on to earn a science degree at the University of Minnesota, taught science, and eventually began working in the landscaping industry. 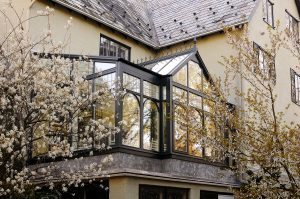 Then, in 1988, Jim’s interest in conservatories was sparked again. “A customer of mine asked if I would be interested in installing a conservatory she had just bought from England and, at that point, I was hooked,” Jim says. Although he was initially working for various companies that built conservatories, Jim eventually decided to start his own business, at the suggestion of his son, Mike. Shortly thereafter, Conservatory Craftsmen was founded, with Jim and Mike at the helm. “We became ‘can do’ designers and builders,” Jim says. “We avoided the big names in the industry, made a pact to ignore the vinyl products that were available and traveled to England in search of the best possible products that we could integrate into our own product.”

From the start, Jim and his team at Conservatory Craftsmen make the design and build process pain-free for their clients. Since they work in all 50 states and Canada, they usually communicate initially over the phone, to gather information on the client’s ideas and time frame, and to request photos and measurements of the property. After all stages of planning are complete, the conservatory is installed in a timely and seamless manner. The end result is a high-quality, beautifully designed conservatory that is guaranteed to last. “We help our customers to understand that these spaces are an investment, quite similar in price to a luxury car,” Jim explains. “Our conservatories are designed to last a lifetime, and are not short-term additions to the home or commercial building.”

The hard work of the Conservatory Craftsmen team is often acknowledged by their thankful clients. “In most cases, our customers share the fact that we have far exceeded their expectations,” Jim says. “Relationships are struck with the folks we meet along the road. Every conservatory is a project, but every customer is a relationship.” In fact, Jim and Mike often keep in touch with their customers for years after the projects are finished. “When we are near an old project, we arrange to meet and chat–sometimes for photos of the conservatory, sometimes just for coffee,” Jim says. “We always make sure to check that the conservatory doors and windows are still at peak performance.”

The dedication of the Conservatory Craftsmen team to their customers is only one characteristic that makes them stand out in the design and construction industry. They also strive to improve and grow their product, so they can continue to provide the best service possible. Jim summarizes their philosophy best: “Our goal is to share the ideals of quality craftsmanship and business integrity to all who dream to enhance their homes and dreams with a conservatory.”

To see the article click here of time and resources expended. 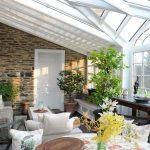 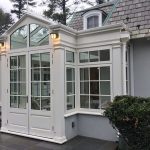 Greenhouses of the Future
Scroll to top