Everyone loves the look of ferns. They’re lacy and intricately formed. They have a calming beauty that reminds one of a shadowed woods with cool and fresh air with just a hint of the tang of a conifer’s needles. Anyone who’s ever read a travel brochure for the Ozarks or the woods of New England, can easily picture moss-covered logs and pathways punctuated by ferns whose fronds seem bowed in silent prayer. Craving that serenity in our homes, we travel to the garden section of the closest department store where we spy just what we are desiring. A huge hanging Boston Fern seems made to order to transform our home into a woodland, a private English garden or that secret nook where we hide from the world. Then, within a short time you realize that your Boston Fern has turned into an unwanted houseguest. If you had known the true nature of the thing, kind of like that rescue dog from the pound that ended up eating your furniture… all of it. Or that boy you couldn’t wait to introduce to your parents. What’s that? Don’t even go there. Sorry, I didn’t know.

Anyway, your gorgeous (in the store) fern has begun to turn brown and shed leaves and branches like it’s suddenly dying. And, sadly enough, it is. Boston Ferns have suffered greatly before they ever made it to your home. They’re under-watered and light-starved. Then, you bring them into your home where, because they’re so huge, they must be hung from the ceiling. Of course, that’s where the driest and hottest air is, and the least amount of window light. It doesn’t take them long to go into panic mode and drop all of their leaves.

A native of New Zealand, the Mother Fern will give you the best of everything that you desire in a fern in the house.

• The ability to live in, and thrive in, a wide range of light conditions

• An easy watering plan that, if met, will not result in wilted or dead plants

• Few if any pests when the fern is kept indoors

• ASPCA approved as non-toxic to dogs and cats

• The opening fronds (fiddleheads) are edible and tasty to boot

The fern is called the Mother Fern” because it is one of the only ferns on Earth that grows babies on its leaves. As the fronds mature they start to sprout little fern bulblets. As more and more babies appear, the older fronds bow more deeply from the weight. If you’re like me, it’s not enough to know that a plant does something really unique and noticeable. I have to know “Why?”

This fern evolved in the plethora of streams, waterfalls, ponds, swamps and bogs of New Zealand. Most ferns grow by releasing spores into the air where they drift on the breeze until they land. But Mother Fern took advantage of the watery areas where other ferns’ spores just sink to the bottom. You see, as the bulblets grow, they gain in weight and the frond bends lower and lower. Eventually “Mom” lays her frond prostrate upon the moist ground and the babies put forth roots. In this manner, the babies get a head start on getting established.

In your home, however, you can simply pin the frond to the surface of a “nursery” pot and the babies will start to grow. Within a month or so you will have new Daughter Ferns to give to friends and family.

Cool Fact: Since the Mother Fern reproduces by “cloning” itself, your resident Mother Fern will be identical to New Zealand’s original Mother Ferns growing there millions of years ago.

Super Secret Care Tip: Do not grow your Mother Fern in a pot that drains out. Instead, place the pot in a bottom dish that allows the water to collect and stay at about 1″-2″ deep in the bottom. That’s right. You WANT your Mother Fern to be constantly sitting in water. If you have to be gone for a week, put a bigger bowl under the pot and fill it until the water is ready to spill over the edge. Your Mother Fern will never drop leaves, turn brown or get messy. 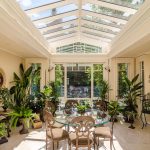 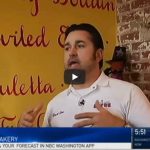 Conservatory Craftsmen and the Inauguration
Scroll to top